On this page, you find literary, visual, and performative works created in the context of this website.

The Day My Mother Tricked The Death, Tony Feda 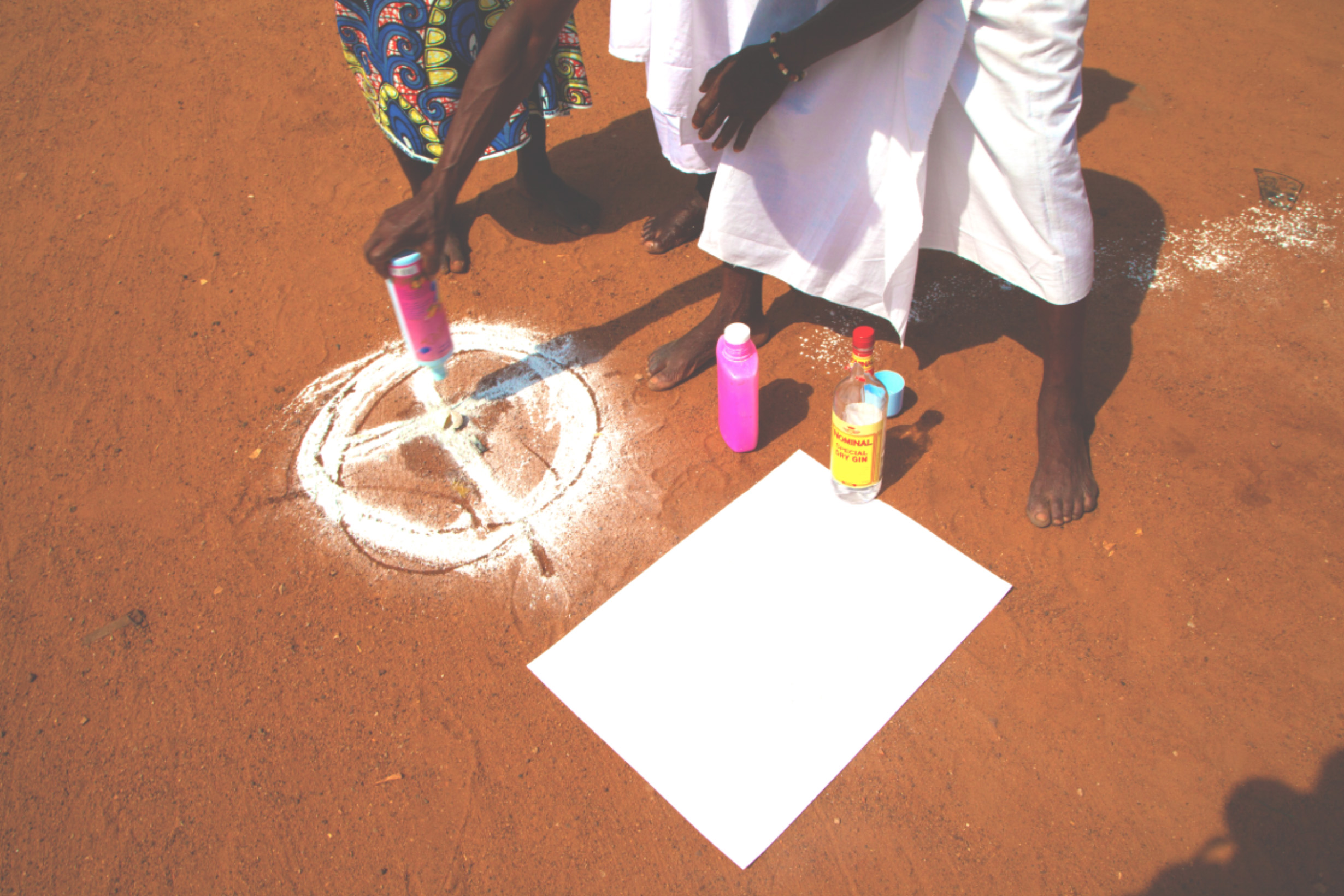 Tony Feda is a freelance journalist and former Fellow of the Akademie Schloss Solitude (Stuttgart, Germany). He is interested in sociology, culture - literature and the performing arts of Togo and has worked for several newspapers including Le Temps, Notre Librairie, www.culturessud.com. In August 2018, inspired by Robert Park and Bourdieu, he started his blog www.afrocites.wordpress.com with articles on themes concerning the city of Lomé, Togo.

The Day My Mother Tricked The Death

Born into a Christian family (of a mother, a follower of the Presbyterian Church, and a father who is a Roman Catholic Church follower), I lived in religious anxiety until adolescence. My mother is of an uncompromising moral rigor, her judgments on day-to-day facts resulted mechanically from these biblical interpretations. Over-devout, she was not only regular in worship but her involvement in Church activities fell on priesthood. At times the far-fetched sermons of her pastor with the extremely mean studies level, rhythm his day-to-day life and still govern our family relations. For example, my soul is doomed to the horrifying flames of Gehenna because of my free manners and my atheistic nature.

My mother’s behavior was antagonistic to that of my father. A Roman Catholic – her father was an extremist catechist who prevented any other Christian religion from settling in the village of Nyamessi – my father paradoxically had a much more cautious distance from the Roman Catholic religion. In Conakry, where he worked as an accountant in an international organization, he was an eminent member of the Saint Michel Parish. He was called Jesus, for once he played the passion of Christ admirably.

However, when my father was on holiday and paying a visit to his relatives in Ghana, he came back with small jars containing herbs, amulets, and boxes of black powder. Items supposed to provide protection to his family and promotion in his profession. With these jars, he applied for weeks the rites prescribed by a voodoo priest. By means of a sterilized blade, he carefully made incisions on parts of my body and put in these blood-red wounds the various powders supposed to provide protection against evil spirits. Multiple food taboos should be then observed during these periods.

I unquestionably accepted all the ceremonies which my father imposed upon me without really understanding the ins and outs and their purpose. My mother, the staunch over-devout Presbyterian follower, never expressed her opposition to my father’s practices. Her approval was not the emanation of the submission by the conjugal duty of an African woman to her husband. She approved of these practices, and it happened to herself, during her visits to the country, to consult a priest of the fa or voodoo, and give money to our uncles for sacrifices to the manes of our ancestors.

In my final year of senior high school, imbued with philosophy and atheistic materialism, I broke all religious practices: I stopped attending the Roman Catholic Church and opposed the small ceremonies to which the old man subjected us. I was severely judgmental about my parents who, in my opinion, solved the complexity of life by primitivism and a superstitious mind.

It was then that I received the shocking lesson of my mother. She who had a very basic level of education, not having even completed a primary education course, did the philosophy lesson to me, who thought I knew more than my parents.

“Son, you look without seeing! If your ears do not hear, do not your eyes see? I often listen to you discussing with your friends, trying to make and change the world but you have no knowledge of the world in which you were born and of things that surround you.

My mother’s name is Adiza. A Muslim name that Hausa and Djerma or Fulani women bear, alien community in Togo. Contrary to the custom of her people, my mother does not have any Ewe names, not even the one that is systematically given to the child according to the day of birth. For example, she was born on a Sunday and should be named Akossiwa or Essi, according to custom.

The explanation is all strange. It is hardly by snobbery or xenophilia that my mother bears a Muslim name. My maternal grandmother was a very late mother when she was forty. She delivered only stillborn or children who died prematurely at birth. Her husband agonized her with insults, and refused to go to his bed; the poor man ironized that he only threw his seed into the sea. My mother’s co-spouse was more serious. She laughed at grandmother and cried out that she did not need to sleep with a man to get pregnant; it is enough that the man climbs over where she urinates so that the pregnancy takes place immediately. Grandmother had a reputation as a witch who ate her own children.

Discouraged and tired of having pregnancies vainly over and over, my grandmother went to consult the fa. When she got pregnant again, she went to consult a voodoo priest. The latter advised her, after ceremonies, to place her newborn child on a path taken by aliens, preferably by women if the child is a girl, and men if it is a male child.

This is how my mother was placed on a path taken by a Hausa woman named Adiza. And her name was given to my mother. Three years later, my uncle, named Lankinya, went through the same process and was named after a Kabyè who had picked him up on a road.

Both children survived. If my uncle passed away at the age of 40, my mother still lives with us.

The experience of my family is not unique, the practice is indeed widespread. My grandmother would have been able to become a mother in a modern society opened to science where medicine reduced since decades the limits of infertility and lengthened those of life? And if this voodoo priest was just a quack who is unaware or a wicked spirit that surrounds his medical knowledge of a halation of mysteries, just to have followers of his gods lost in the grass he sprinkled with red oil, chicken blood, and other goats?

It is an apprehension. The agnostic I have become remains dubitative or uncertain. Western philosophy, its categories with which I explain the world, does not absolutely restore the world, or in any case has not transformed it, a wish dear to Karl Marx. Despite what it teaches us, life remains indescribable chaos where it is always difficult to find inner peace, inner happiness, and such nirvana to which one aspires.

The lesson of my mother brought me back to humility, to see otherwise my relations with things and beings.

In Between – single screen video created in an interdisciplinary collaboration

This film was created and realized 2020 in an interdisciplinary collaboration of Anna-Lea Weiand, Daphne Klein, Esther Schlünkes, Katharina Senzenberger and Lisa Hellmich